International Women’s Day on March 8 is a time for reflection on the successes that women and girls around the world have made in pursuit of gender equality. But as the theme of the day, ‘Press for Progress’, suggests, we must also consider the challenges ahead.

Past progress does not in itself imply a better future – we have to guard against complacency and continue to press forward for change.

In global education, that means all children should be in school, learning, and developing the skills they need to boost incomes and contribute to their communities.

Overall, more children than ever are in school – including more girls – but new data from the UNESCO Institute of Statistics (UIS) also reveal that the number of out-of-school children aged 6-17 has plateaued at a staggering 263 million. This means that the world continues to lose the potential contributions of millions of children held back by barriers to education such as poverty and gender discrimination.

The volunteer-run 60 million girls Foundation, based in Montreal, supports education projects in high-needs communities in developing countries. Understanding the dynamic between gender, education and poverty is crucial to our work. Data helps to confirm anecdotal evidence, and it guides our thinking in directing funds to where they are needed most.

As a result, we have focused our efforts on girls living in rural areas or refugee camps where traditional schooling is either non-existent, is replete with risks such as sexual and gender-based violence, or fails to provide children with the skills they need to pull themselves out of poverty.

Data have proved extremely useful in contextualizing the school environment for indigenous children in Nicaragua’s Bosawas region, for example, where we funded a project in 2015, and in rural Guatemala where we are working this year.

While regional statistics show high enrollment rates overall, the specific situation in these communities reveals that the indigenous people we are serving, especially the girls, have fallen under the radar with much less access to education than the general population.

As education advocates, understanding the context that children face in their communities is crucial to understanding what type of project will truly meet their needs. It is also useful in explaining the need to our supporters and donors. Posted on social media and in our blogs, data mapping tools, such as the UNESCO eAtlas, are helpful in illustrating the overall need for support and why it matters. 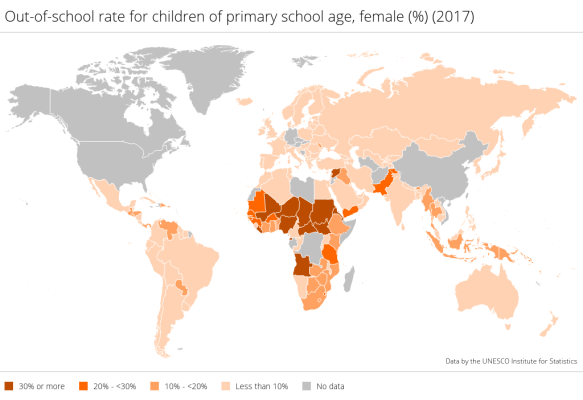 Explore the data in the eAtlas

The UIS’s adjusted gender parity index fell steadily in the decade to 2011 but has crept up in the last four years. Moreover, the index shows that primary-aged girls face the strongest disadvantage in Central Asia, Southern Asia and sub-Saharan Africa, three of the world’s poorest regions.

Interestingly, with the exception of children in sub-Saharan Africa, once in school, girls tend to do better than boys, which makes the impact of declining opportunities for girls at the primary school level particularly galling.

Quality education has an important impact on poverty

We know that educating a girl has important consequences for global poverty reduction. Each additional year of schooling can raise a girl’s future earning power by up to 20%. There is also a strong intergenerational impact because an educated woman is more likely to send her own children to school, thus helping to break down the poverty trap that keeps so many families destitute from one generation to the next.

Research shows that the quality of education is the crucial element in skill development and creating better wage growth opportunities for households. Yet, data tell us that even children who are in school are not learning. According to the UIS, 617 million – 6 out of 10 – children and adolescents do not meet minimum proficiency levels in literacy and mathematics.

When 60 million girls’ president and founder Wanda Bedard visited a project we are funding in the Koinadugu region of northern Sierra Leone, her anecdotal experience confirmed the trends seen in global data: the poor quality of education was having a negative impact on learning.

Hoping to strike up “pen pal” relationships, an enterprising group of Montreal-based students had given Wanda letters to deliver to the local school children. Sadly, the children from the remote rural villages were barely able to read the correspondence or craft cogent responses. We decided to design a mobile, after-school learning system for girls and boys, to help bridge this gap.

So, on this International Women’s Day, let’s remember that while there has been a global reduction of gender bias in education with equal numbers of boys and girls out of school, the data show that in low income regions and poor communities, girls continue to face higher barriers to education than boys, and many children who are in school just aren’t learning.

We know that poor girls in low-income countries and in rural communities, continue to face high barriers to education, despite the fact that their performance on learning assessments show a dogged determination to get ahead.

Let’s all ‘Press for Progress’ and do our best to get all children – girls and boys – in school and learning by making the best possible use of data.

3 thoughts on “Advocating for Girls’ Education: Why We Need Data”