By Silvia Montoya, Director of the UNESCO Institute for Statistics (UIS)
This blog was also published by the Global Partnership for Education (GPE).

Almost one-third of young teens worldwide have recently experienced bullying, according to data published for the first time by the UNESCO Institute for Statistics (UIS). The data are part of a major new release of 32 global and thematic indicators to monitor progress towards Sustainable Development Goal 4 (SDG 4), which included the updating of the UIS global education database for the school year ending in 2017.

We know that bullying in schools affects the ability of youth to learn, can contribute to feelings of worthlessness and leads to higher dropout rates. That’s why the SDG thematic indicator 4.a.2 – which tracks bullying – is so important. 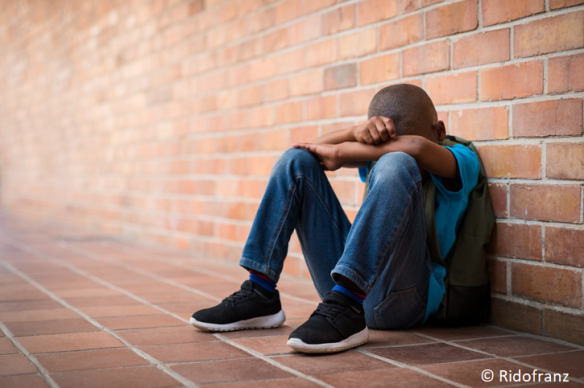 Schools should be a safe zone for all young people. Quality education depends on it. Yet, health surveys show us that bullying affects children everywhere. It ranges from a low of 7% of all adolescents in Tajikistan to a whopping 74% in Samoa and is pervasive across all regions and countries of different income levels. For example, 44% of adolescents in Afghanistan experience bullying, as do 35% of adolescents in Canada, 26% in Tanzania and 24% in Argentina.

Data based on self-reporting

The data were collected from in-school surveys that track the physical and emotional health of youth. The Global School Health Survey (GSHS) focuses on children aged 13 to 17 years in low-income regions. Similarly, the Health Behavior in School-Age Children (HBSC) targets young people aged 11 to 15 years in 42 countries, primarily in Europe and North America.

Clearly, self-reporting has limitations. Some bullied children may be reluctant to reveal incidents in school or fear exposing someone in a position of authority who may be condoning (or even perpetrating) this behavior. This could mean that bullying in some communities may actually be under-reported.

The situation facing girls and boys

With a gender lens, we see that boys are slightly more at risk of bullying than girls. The data – which do not include sexual or other forms of gender-based violence – show that more than 32% of boys experience bullying in school, compared to 28% of girls.

When looking at the 10 countries where children report the highest incidences of bullying, however, the median rates tell a slightly different story: a staggering 65% of girls  and 62% of boys report bullying, revealing that where bullying is most pervasive, girls are more widely impacted. 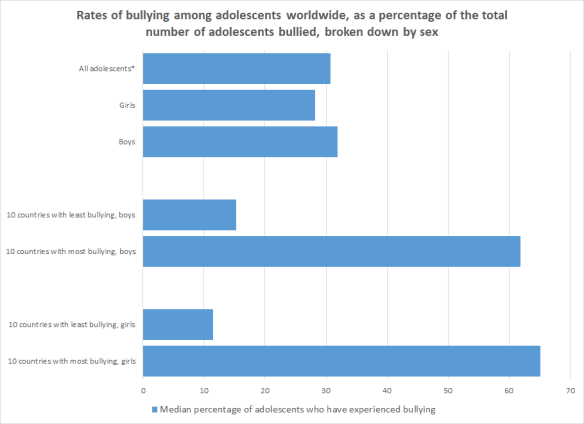 Socioeconomic and immigrant status also play a part in bullying, according to the HBSC data on children from Europe and North America. In fact, in these regions, socioeconomic status – based on parents’ wealth, occupation and education level –  is the most likely predictor of bullying in school: two out of five poor youth are negatively impacted. This compares to one-quarter of teens from wealthier families.

Finally, also based on the HBSC data, immigrant children tend to be more vulnerable to bullying than their locally-born counterparts. As migration around the world reaches new peaks, it is worth asking whether bullying will further complicate the ability of this vulnerable group to learn.

What are the main takeaways?

Understanding bullying around the world – and doing something about it – is at the heart of SDG target 4.a, which aims to broadly track the overall school environment beyond pedagogical matters. As with other targets, this one is measured by specific indicators like 4.a.1 which looks at school facilities, indicator 4.a.2 which tracks bullying, and indicator 4.a.3 which looks at the separate issue of violence in schools.

Why do we need data on bullying?

Data are the key to change. They can reveal who is affected by bullying and point the way to better programming by both national governments and international and non-government organizations. Over time, trends can point out whether interventions are working. Ultimately, the more knowledge we have, the more we are able to channel resources to children who need help the most. As the custodian for all SDG 4 data, the UIS is working with a wide range of partners in education to provide them with the tools they need to make this happen. This is why we regularly release new education data, and brand new data on bullying.