By Dankert Vedeler, Chair of the Governing Board of the UNESCO Institute for Statistics (UIS), and Advisor to the Norwegian Ministry of Education and Research / Ministry of Foreign Affairs

The countdown has begun, with just a decade to achieve the Sustainable Development Goal on education (SDG 4): a quality education for all. After so many years devoted to education at the national and international levels, my resolution for 2020 is simple: Let data be your guide.

It is because I believe so fervently in the need for robust data to guide education policy and practice that I am so honoured to serve as the newly elected Chair of the UIS Governing Board. In  recent years, I have seen the UIS transform the many challenges of measuring progress towards SDG 4 into opportunities. I recall, for example, the sheer excitement of being in Paris at UNESCO Headquarters in November 2015 when the Education 2030 Framework for Action was unanimously adopted by more than 100 ministers based on the proposal from the committee I had chaired. Yet the ceremony was barely over before the whispers of doubt began in the corridors: ‘How will they ever measure learning globally? It’s impossible’. 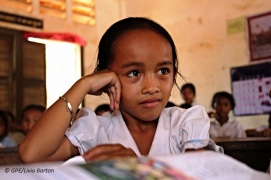 True, it has not been easy. But after intensive technical work and often complex political discussions, the UIS produced the methodological tools to do what so many said was impossible, using existing data to calculate progress on SDG Indicator 4.1.1. By making it feasible to track learning outcomes at three points in a child’s journey through education, the UIS paved the way for the upgrading of this crucial indicator by the Inter-agency and Expert Group on SDG Indicators (IAEG-SDGs) to Tier I status in 2019. This means that we now have indicators on learning that are conceptually clear, and that have internationally established methodologies and standards. Above all, data are being produced on a regular basis by at least 50% of countries and for entire populations across every region where these indicators remain relevant.

2019 also saw the IAEG-SDGs agree to include an indicator on school completion (SDG Indicator 4.1.4) in the global indicator framework. While there is no doubt that school enrolment has soared in recent decades, we cannot be complacent about the many millions of children who still drop out each year without completing even a basic education. Without knowing who or where they are, how can we hope to keep them in school?

Thanks again to the UIS, the IAEG-SDGs also agreed to upgrade SDG Indicator 4.7.1 on the extent to which education for global citizenship and sustainable development are embedded in national education policies; curricula; teacher education; and student assessment. This is now a Tier 2 indicator, meaning that it is conceptually clear and has both an internationally established methodology and standards. The necessary data are not yet regularly produced by countries, however, so we need to breathe life into this new indicator.

As a result of such progress, the UIS global education database now includes 33 of the 43 indicators used to monitor progress towards SDG 4. While developing new indicators, the UIS has also expanded the data coverage rate on these 33 indicators, from 41% in 2017 to 52% in 2019. It has done so by thinking outside the box: not only by training more than 650 national statisticians and policymakers on SDG 4 monitoring – vital though that is – but also by making greater use of different data sources, looking beyond the international and regional educational assessments.

The UIS can be proud of its achievements. But this is no time for celebrations. We still have a long way to go if we to have any prospect of achieving SDG 4. Indeed, there are fears that the education goals may slip beyond our reach without a dramatic shift from business as usual. That is why the UIS has its own resolutions for 2020.

First, we will build partnerships to help countries improve the quality and coverage of their data.

Countries need more support than the UIS can provide on its own. Once again, we are turning a challenge into an opportunity by building the Global Coalition for Education Data, bringing together countries, donors and other development partners. With support from the Coalition, more countries can improve the quality of their data for their own policymaking while benefiting from the international standards and tools, being developed by the UIS for SDG 4 reporting.

Second, we will make the best possible use of the data we already have. This year will see the UIS put the finishing touches to tools that will help countries slot their own learning assessment data into a single reporting scale, supporting the fair and accurate reporting of assessment results required for the achievement of SDG 4. With support from the Bill & Melinda Gates Foundation and the UK Department for International Development (DFID), the Institute is testing this approach through workshops in countries, such as Bangladesh and India, where millions of children are making their way through school to enable practitioners to apply the linking methodology to real-world data.

Third, we will prioritize data that guide policy. Many countries struggle to produce the most basic education data. At the same time, the SDGs demand more and better data than ever before, covering many areas that have never been monitored before. We recognize the scale of the practical constraints they face, and will continue to prioritize data on the indicators that countries can use to drive policymaking. Take teachers, for example. We know that nothing happens in education without them, but they need the qualifications and support to do the job.  This is why the UIS works with partners, including Education International, the UNESCO Teachers Task Force and the Global Partnership of Education, to develop standards to compare teacher qualifications across countries.

Fourth, we will promote the use of UIS data – looking far beyond data collection. It is always worth reminding ourselves that good data have an impact. Take just two examples from 2019. The first SDG 4 projections issued by the UIS presented a grim prospect: a world that is off track to deliver on its education commitments by 2030. Released at the High-Level Political Forum in July, the projections proved to be a catalyst for action at the September meeting of the United Nations General Assembly and beyond. And the UIS database on learning outcomes indicators was the main source used by the World Bank to produce its baseline estimations on ‘Learning Poverty’. The new indicators, produced jointly with the UIS, were the foundation of the Bank’s new campaign to improve literacy and numeracy skills worldwide.

Finally, we will continue to work on data to support non-educational SDG targets. As well as being the custodian of the world’s education data, we also provide data on science and culture. 2020 will see three surveys to support our work on these other areas of responsibility: a survey to support the achievement of SDG target 9.5, which calls on countries to encourage innovation and substantially increase the number of researchers; a survey on SDG Indicator 11.4.1, which monitors total expenditure on the preservation, protection and conservation of all cultural and natural heritage; and, in collaboration with UNESCO headquarters, a survey on SDG Indicator 16.10.2 on the number of countries that have constitutional, statutory and/or policy guarantees for public access to information.

We hope that partners the world over can help us achieve our resolutions for this new year, and for a new and critical decade. The Global Coalition welcomes any partner who believes – as we do – that robust data, used effectively, will guide us to a sustainable future for all.